The electronic marijuana vaporizer has taken getting stoned to new highs! It is better for you, you get more out of the weed and there is no combustion! It is the combustion or burning factor that is a danger to cannabis smokers. When weed or tobacco is burned it produces several known carcinogens. This is bad and can cause cancer! The traditional ways of smoking weed (joint, bong, chillum etc) are outdated although they are still preferred by most potheads! But they are bad for you! Ahh but what is bad for you these days right?

The electronic marijuana vaporizer is more expensive than buying papers or a bong but the health benefits out weight the cost for sure. Plus vaping is new people have been smoking weed for years lets change things up a bit and bring weed into the future.

Can we be sure electronic marijuana vaporizers are better?

That is a tough question as research has lead people to believe, vaping either cannabis or e-liquid is a “healthier” option compared to its combusting counterpart. No burning means none of the crappy carbons or toxic stuff is released and absorbed through the lungs or skin. So if you vape it it’s healthy right? 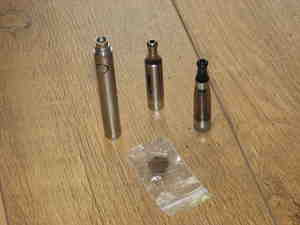 Well i’m not sure as there is plenty of evidence that suggests smoking weed is bad for you what ever way you do it! Mental illness links mainly. Cannabis is a kind of sedative it does effectively the same thing as many pharmaceutically made drugs like Vallium.

Cannabis is natural though so why make stuff that exists in nature? Ah it is a massive argument and way to in depth to get into but we can not be 100% sure that vaping is better for you. As we can’t be sure that the drugs doctors give us are safe. A lot of prescribed meds are known to have serious side effects. So it’s best to make your own mind up instead of listening to what people have to say I reckon.

Safety concerns with electronic cannabis vaporizers range from self com-busting vaporizers. Right through to battery ions bonding to the T.H.C. particles, resulting in weird lung and skin mutations. The period of time this has been studied for is very short. This means there is no long-term accurate data.

Electronic marijuana vaporizer have been know to self combust.  There was an incident in Texas where a young man was driving down the freeway with a vape in his pocket. He had some other stuff in his pocket which activated the heat switch. The dude set fire to his trousers and car seat. By the time he was able to stop and pull over he had 3rd degree burns to his legs. He spent three weeks in hospital recovering but they couldn’t stop his johnson falling off. In regards battery ions bonding with the T.H.C. and causing mutations. There is no substantial evidence to back this up and only a few cases have been investigated.